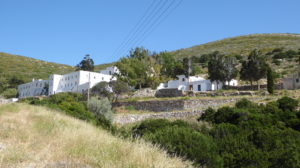 The Monastery of Longovarda, picturesquely set high in the cleft between two hills, 5 kms north of the island capital of Paroikia, was founded in the 17th century and, except for the period between 1800 and 1825, has been an active Monastery since. There were 50 monks at its height; today there are are still 10 monks, living a life of shared toil, possessions and prayer.

In 1927, the English author and traveller, Vincent Clarence Scott O’Connor, visited Paros. He travelled the length and breadth of the island on mule back meeting the local people in order to understand the history, culture and traditions of the island at a time of great change for Greece and the wider Greek world.

On one of his journeys, he visited and stayed overnight at the Monastery and wrote extremely warmly of the welcome he received from the Abbot and the monks. As he departed, they implored him to return, but he left feeling that he could never repay the debt of gratitude he owed to them.

Alas, VC never revisited the Monastery, but, over 90 years later, his words and sentiments did make the return journey, conveyed to Novice Monk (Δόκιμος) Hector, in the hope that the hospitality and kindness shown to a travelling stranger by the Abbot and the monks of that time will be added to the already rich catalogue of the history of Longovarda Monastery.

On my first visit to the Monastery, I met with Novice Monk Hector who courteously escorted me and regaled me with stories from the Monastery’s history. On my subsequent visit, I met Father Leontios and learned more of the amazing story of Father Philotheos, who entered the Monastery in 1907 and served as Abbot from 1930 until his death in 1980. On both my visits, I experienced that same hospitality and welcome as had VC, almost a century before. There is clearly some spirit of philoxenia pervading the Monastery, which transcends the passage of time. I’ve recounted the story of Father Philotheos in the following separate blog post.

I’ve also included a separate blog of the text from the English leaflet issued by the Monastery detailing its history.

The Monastery is open between the hours of 09:30 and 12:00 to male visitors only. Appropriate respectful clothing must be worn including long trousers (no shorts).

This account is from VC’s book ‘Isles of the Aegean’, published in 1929, describing his visit to the monastery in 1927. The complete book may be downloaded for free by visiting http://isles-of-the-aegean.click.

VC may well have met the saintly Abbot Philotheos III during his stay at the Monastery in 1927, although, at that time, he would not have been Abbot. Read more about Father Philotheos III

I now left Paroikia for a tour of the island, and made my first halt at the Monastery of Longovardar. At this end of the island though the hills are bare, the landscape is diversified with fields, the road takes an even course. The stone walls that define it contain many an old marble taken from buildings of the classic period, and one cannot doubt that beneath the surface that meets the eyes, the old city lies buried, awaiting its hour. Upon reaching the watershed that divides this peninsula I looked upon a charming landscape; the cultivated valley as it descends becoming the harbour of Naoussa, where once the Venetian fleet and the Russians under Catherine the Great, found anchorage. It was an idyllic scene, Sicilian in its beauty.

I rode up a causeway built by the monks with their own hands; but it was not till I came very near to the Monastery that I saw it ensconced in its narrow gap; its white building, terraces, gardens, and woods. In the outer court where the causeway came to an end, an old man sat with his back to a wall, basking in the sun. He was clad in black homespun and wore a conical Tartar hat. His beard and hair were silver white, his staff lay beside him upon the ground. He was the Abbot; a man eighty-two years of age, of which seventy had been passed within these walls. He betrayed a gentle surprise at seeing me and asked the purpose of my visit. A monk who had been working in the fields came up, and without enquiry, took our beasts to a stable and carried my baggage within. The evening sunlight was falling on the monastery garden. A great cistern filled with rain water, supplied the stable where the monastery cattle were lodged. There were terraces of corn and careful rows of vegetables, a forge, a washing pool, a tannery, and some dwarf cypresses; last survivors of the woods that once covered this part of the island. Here too were beehives whose honey is scented with the wild herbs of the mountain-side.

In the cemetery the skulls of dead monks lay exposed in rows, as well as the bones of those who desire to share in the sanctity of this resting-place, each box labelled with the name of him of whom they once formed a part. It was a world remote from the strivings and the cares, as well as the joys of ordinary men.

The Monastery Church stands in the centre of the inner court, and by the time I entered it the monks were assembled for evening prayer; dim lights were burning amidst its Byzantine harmonies, the Abbot was seated in his chair, an aged monk beside him leant upon his staff; the other brethren stood upright in their pews, and the monastery servants stood at the door holding their hats in their hands. Oh! for a Flemish painter said I.

The scene was of a primitive and cloistered beauty peculiar to such places; the shimmer of the lights falling upon the gold iconostasis and illuminating the pages of the sacred books. I was ushered without a word into a pew near the Abbot, and heard his low tremulous voice as he prayed. The monk who had taken me through the garden and had told me of the years he had spent in Philadelphia, was now busy lighting the tapers one by one. Another stood in the door that reveals when it is open, the High Altar, and intoned the service; while at intervals swiftly repeating their Kyrie Eleisons, the monks bent down to the marble floor and raised their hands in obeisance; rising and falling as the Mussulman does at his prayers. The service went on for an hour, and as the incense filled the dim vault of the church, the tapers were gradually extinguished; one solitary light alone burning in the darkness, as each monk came up to the Abbot, and bowing low, almost touched with his brow the marble at his feet. When the last of them had thus concluded, the Abbot stepped down from his place and turning to me invited me to go to dinner.

This was served to me at a long table in the Refectory, where I sat alone, for it was Lent and the monastery was keeping a rigid fast. I was allowed no meat, but was given a white soup made from sesamum seeds, some wild bitter herbs served with olive oil, bread, and a bit of mysethra with honey. A single orange was handed to me as a rare luxury.

After the meal we sat in the Abbot’s Reception-room, and conversed upon several matters. One of the monks was a white-bearded and handsome old man, who had been Head Cashier at the Bank of Athens for forty years and had recently entered the monastery as a brother. He had a fine voice, and I had been struck with his scriptural air and noble countenance as he sang in the chapel. His son has followed him in the Bank, and all worldly cares removed from his mind he is now content to pass his last days at the monastery. Yet the life he has chosen is hard and austere. At three o’clock in the morning the monks arise and assemble for prayer. After two hours of protracted worship they rest for an hour, and then begin the labours of the day; each man undertaking some part of the duties of the monastery. The Abbot paints, and in his private room I was shown many specimens of his craft. This Monastery is of the Kinovion order; the monks dwelling together and living by a strict and co-ordinate rule of life. The present Abbot is the nephew of the founder and has known no other life. It was plain that the impulse that called this place into existence is yet unspent.

I climbed before sleeping, to the terraced roof of the monastery. The rising moon was flooding its dark courtyard, half-lighting its tall cypresses and the cupola of its church. The white buildings made a ghost-like splash upon the barren hill-side, the stars shone overhead, and a faint breeze blew landwards from the sea. The great door of the monastery was closed, and within its embattled walls we were safe and secure from molestation, remote from all those incidents that make up our common world.

Next morning I was taken round the buildings, and shown the Bakery, where the monk whom I had observed with grave dignity lighting and extinguishing the candles in the chapel, was now baking the day’s bread. After their early service, several of the brethren had lent him their assistance, and now the brushwood fire in the oven was lit, and the baker in his apron stood before it, inserting at the end of a long wooden spatula the loaves to be baked. It was a lofty chamber, mediaeval in its character though of recent date, and more than ample for its purpose.

I left the Convent as the sun came over the hill. The monks kind and hospitable to the last, had taken care to provide me with lunch, and the Abbot, in spite of his years, accompanied me a little way up hill to bid me farewell. I was asked repeatedly to renew my visit. But they had nothing to look for from me, and I left, as I remain, their debtor.